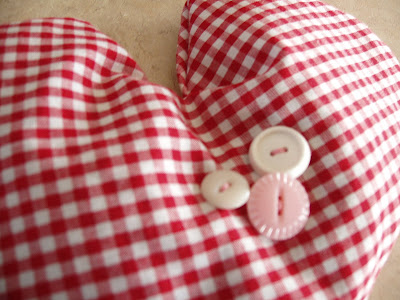 Thank you to everyone who wrote in with suggestions for what might be wrong with my sewing machine (besides the sewer!) Since the manual said that one need not adjust the tension unless sewing fabric like denim, or canvas, I decided to try a few things with the bobbin. I found a new red bobbin and threaded in some new red thread on top. 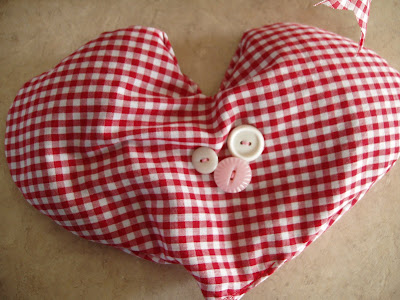 I sewed this up with out any problems at all! I even remembered to turn it right side out before I stuffed it with the lavender blossoms. (Read between the lines on that one. Did I mention before about my total lack of sewing skill?) Note to self: next time sew the buttons on first before sewing the hearts together. See previous sentences for help with that one. *sigh* Looking on the bright side, I'm learning something new with each project.

I love gingham, especially red. It's so cheerful. I sewed a bag a few days ago for the laundry room in this gingham. It's like a clothespin bag, but for those net bags I put all the bibs and baby socks into the washer all tucked inside. 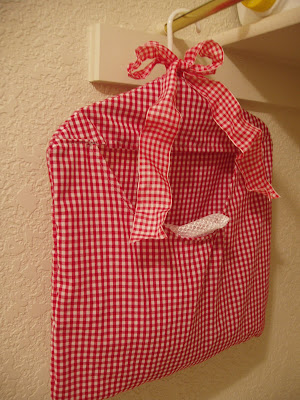 I had a ugly, cheap looky bag before that I had the pins in, but I've always hated it. I tucked the pins into a little metal wall pocket so they're easy to grab with I need them. Then I just started cutting a sewing until I made my little bag. I used a baby hanger to hang it up on the rod. It's a bit dizzying with the gingham ribbon, but I'm leaving it on until I figure out something better. It has really brightened up the laundry area. I may make another lavendar-filled gingham pillow to use in the dryer.

I stopped using those dryer sheet things about a month ago. I'm now just adding a half cup of vinegar to the final rinse cycle of the washer to soften the fabrics. It works really well. No, the laundry does not smell like vinegar at all. I was just thinking it might be nice to add a bit of a lavendar scent.

I'm planning to begin making our laundry detergent soon as soon as I finish up the regular store-bought stuff. I'll post the detergent recipe once I've tried it a few times to see how it goes. We're not having the best luck with alternative/natural dishwasher detergents yet, but we're experimenting. Once I have something that I feel like I can recommend, I post the instructions. Until then, we'll keep on trying.

I was also thinking that it might be nice to add some lavender to the next tea cozy as the heat from the tea would help release the fragrance. I wonder if the scent might be overpowering, though. What do you think? I may try first just sewing a lavender pillow to use as a trivet under the pot. Can you tell I'm having fun? It's neat to think of all the stuff I can make even without using a pattern.

Well, tomorrow afternoon I'm planning to do a simple Sweetheart Tea with my Sweetheart during naptime. I'll brew Earl Grey for him, and a pot of the Valentine Blend for me. I'll make some chicken salad sandwiches, scones, and something yummy for dessert. I'll include a few slices of the banana bread, unless he eats it all first! I have a million different heart-shaped cookie cutters, so everything will probably be served in little heart shapes. I love that.

Have a lovely weekend!

I know I have a wonderful recipe for homemade laundry soap somewhere. I will try to find it for you. My girlfriend just loves it, and she has six children to do laundry for! Your sweetheart tea sounds "sweet". Twinings Earl Grey is a favorite of mine (and I recently read the favorite of the Queen of England). Have a wonderful time with your hubby.

Congratulations on conquering the machine. I KNEW you could do it - it really is usually something simple like the threading being off, or the bobbin turned the wrong way. Best to do just like you did, and put it away for a day or two - then when you try it again, your fresh and not frustrated, and you can make it work. LOVE your red/white gingham creations! Happy Valentines Day celebration to you and Sweetheart!

I love your sewing projects...and think they turned out very nice. I hope your afternoon tea is lovely as well.

I'm in love with the little gingham bag you made! The bow makes it! I, too, use vinegar in my wash and have considered doing my own laundry detergent but didn't know where to start with that. I'll be looking forward to what you discover.

I make different kinds of soap, but have never tried making laundry soap. Must try this recipe, thanks so much. Can't wait to see your valentine setting.
I am having a Valentine Tea Party Friday and I will be posting my table setting sometime this week as well as valentine decor. May God bless your day. RoseMarie 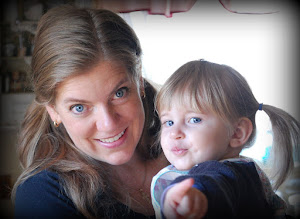